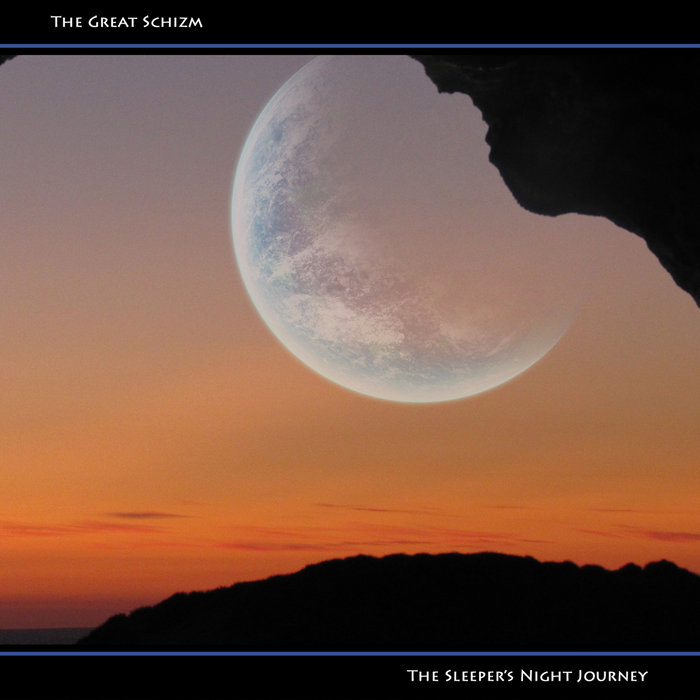 darkcasey The Sleeper's Night Journey is a collection of dark ambient tracks that really embody the strangeness and ethereal nature of dreams. Whether it’s the lullaby-like high tones or the rushing wind of otherworldly vistas, if I had a night of dreaming that followed the impressions that these tracks gave me, I’d wake up a very happy person. Favorite track: The Platform.

Cloud Hunter Records presents The Sleeper's Night Journey, a concept album about the world of dreams and all the wonderful places that can be visited in the mind's internal nightly wanderings.

This is the digital download edition. A physical CD edition is also available for the same price, and includes the complete artwork and credits.

For any further enquiries or information, please get in contact at www.CloudHunterRecords.co.uk.

Review for The Sleeper's Night Journey, written by J Simpson at TheEqualGround.com.

"Dreams are strange things; refractions of our daily life, pertaining to reality, but at the same time, different than. An alien otherness pervades the scenes that haunt us while we sleep. It can also be difficult to say whether a dream may be "good" or "bad", there may be elements of terror and sadness, mixed with wild elation. They simply ARE - confining to their own logic.

"Each song on The Sleeper's Night Journey is its own little snowglobe universe, with its own physics. The shifts, however, are subtle and ebbing, rather than abrupt jump-cuts, so you almost can't notice the terrain undulating around you.

"The Sleeper's Night Journey by The Great Schizm is ambient music, in every sense of the word; it is beat less, other than the rhythm of waving, lapping sine waves; it could be used as background music, in the manner of Erik Satie/Brian Eno's "furniture music", sound sculptures to explore and examine, leaving them to gather dust in the corner; and it is ambient in the sense of "ambience", the suggestion of space, as these tone poems seem to evoke starry realms and wide-open landscapes, maybe from another planet, or this one, viewed from a far off time or place.

"“TSNJ” is an even split between traditional ambient and dark ambient, and stacks up against monolithic recordings of either genre. His compositions glimmer with the same alien ominous wonder as Aphex Twin's Selected Ambient Works II or Brian Eno's Apollo Soundtracks, with a similar depiction of zero gravity as the latter. It also features the ghastly, ghostly clanks, creaks, and groans of dark ambient titans like Lustmord, older Rapoon, and Raison D' Etre, but are a little less menacing. This suggests making peace with the dream lords, at the center of the labyrinth, rather than being terrified of them.

"The Great Schizm avoids a lot of the pitfalls that lesser ambient producers fall into, by keeping his soundscapes constantly evolving, and morphing, making them organic ecosystems, rather than dead, jittering loops. On top of this, his usage of reverb is exceptional, making things sound vast and far away, but still keeping them reined in, and swallowing the mix. He also has a musical ear, with dense, lush pads, grand classical chords time-stretched to infinity, becoming a bridge towards your outer thoughts.

"I would give you a play by play, but that would be like giving you a roadmap, and would erase the sense of wandering wonderment that this album naturally evokes.

"The Sleeper's Night Journey's greatest achievement is the blending of the light and dark, of the terrifying and the sublime. The pretty moments are truly beautiful, and thankfully, it mostly hovers around weird and uncomfortable, rather than truly horrifying. This would make an excellent introduction, for someone looking to get into the darker shades of ambient synth music.

Review for The Sleeper's Night Journey, written by Matt Hoyle at TheMezzanineMusic.com.

"Meet The Great Schizm and experience his album, The Sleeper’s Night Journey, which packs numerous ambient soundscapes into it’s hour or so running time. Ambient music, by definition, is meant to play in the background and not hold the listener’s attention and many musicians create ambient music to this effect (think ‘elevator’ music or the type of music you get in bad charity shops). However, the very best ambient musicians (such as Aphex Twin’s brand of ambient techno) go ‘off brief’ and create something that holds the attention while still owning the idiosyncrasies of ambiance: smooth waves of sound and free-form composition. Many an artist (such as Brazil’s Dunas) manage this, while remaining unsullied by an overt beat, and create something that becomes mentally all-encompassing and grips the listener like a piss-head holding onto the grass; worrying they are going to fall over. This free-form, beat-less composition formed by smooth waves is something that is immediately obvious when listening to The Sleeper’s Night Journey.

"What is fairly unique about this ambient record however is the concept it is based around. The Great Schizm’s concept for The Sleeper’s Night Journey is the link between music and sleep and while these aren’t things that usually coincide, it is an incredibly prosaic thought. Many a lyricist has written about dreams, wishes and these psychological manifestations and this purely instrumental form of music takes this to a whole new level. It is these dreamscapes that form the backbone of The Great Schizm’s latest work. Each individual piece (not song; piece) undulates around a new landscape, a new theme and a new concept that is not entirely based in a real world – the interpretation though, is up to you.

"It is because of this instrumental concept that giving you a blow-by-blow account – informing you of my own interpretations – of each piece would defeat the object of Schizm’s vision. These dreamscapes are for you to decipher and whether each dream is a nightmare, a good dream or somewhere in between is down to individual interpretation.

"The real standout piece on this record is the extensive “Distant Realms of the Continent”. It’s twenty-plus minute running time may put off a listener, but as with the likes of Explosions in the Sky and Godspeed You! Black Emperor, The Great Schizm thrives with extended pieces. Moreover, it’s clearly the darker side of Schizm’s psyche that has control on this track as the soundscape created is simultaneously compelling and demoralising as all manner of (possibly) nightmarish sounds are found.

"Synthesised sounds are commonplace throughout The Sleeper’s Night Journey and, when coupled with a myriad of other instrumentation, a serene beauty is found on such tracks as “Beyond the Northern Wilderness”. Environmental recordings, such as the wind, are used to great effect to create impactful imagery that carries out the purpose of transporting the listener to another dimension. While, to many, the composition surrounding these recordings may seem formless and incredibly abstract, it allows for further interpretation; in the same way as classic poetry.

"“The World Without Sky” holds similarities with many an artist’s work. An air of Godspeed You! Black Emperor’s builds, “Tubular Bells” unnerving tuned percussion and the sort of repetitive motifs found in Tycho‘s work form the crux of this piece and forms a standout that creates a contrast with the preceding “Northern Wilderness”. It moulds the psyche of the listener in several ways that changes dependent on personal experience and, as with the entire record, allows for unique interpretation.

"What is clear throughout this record is that an incredible amount of forethought and planning has gone into forming this ambient record. The dreamscapes have been formed in such a way that they form whole dimensions that are contained within the confines of each piece. It’s truly wholesome, compelling listening as each track brings forth a new idea, a new world or a new emotion.

All music and artwork by The Great Schizm.